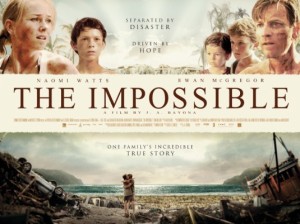 Having grown up on the Disaster Movies of the 70s and 80s, there is one thing I am very sure of about The Impossible. This is no disaster movie. Instead, we are given just a small glimpse into the unimaginable horror and devastation that was the Boxing Day 2004 Tsunami through its impact on one family – a man and his wife and their three sons, two aged just 7 and 5. Holidaying in a luxurious resort on a Thai island, the family is ripped apart by the waves, smashed against God knows what under the mass of water. Finding each other again, even just surviving such a disaster, would be a miracle. It is this endeavour which holds you fast in your seat watching The Impossible.

The Impossible is based on a true story although here the story has been Hollywoodised – the original Spanish family has become British with Ewan McGregor as Henry, Naomi Watts as Maria and Tom Holland as their eldest son Lucas. I doubt, though, that this transformation matters a jot in the scheme of things because it is impossible not to be drawn into the arms of this happy and loving family. The fact that they are on their Christmas holidays in such an idyllic, beautiful spot only heightens the contrast of what’s to come. When it does come, it is superbly done. Foreshadowed by a series of little, jarring moments – ominous shudders on the plane, movements of the sea, disturbed dreams – the tsunami itself, when it comes, is incomprehensible in its force. The film does not flinch – although I did.

The tsunami obviously devastated local communities and here we are focusing on a family of holidaymakers who, should they survive, have homes to return to, but The Impossible does not look the other way. All nationalities are reduced to one humanity here, with people trying to help each other or, in a very few cases, not helping. As outsiders ourselves, the performances of McGregor, Watts and Holland (as well as the two little boys) powerfully allow us to get just a taste of an idea of what it might have been like. There’s another little boy in this film and when he tries to comfort Naomi Watts’ character it’s impossible not to give in to the tears.

I’ve had my issues with Ewan McGregor’s acting over the years but surely here he gives a career-defining performance. As does Naomi Watts. The lives and stories of others around them, people they meet, help or are helped by, together build this astonishing portrayal of human endeavour, determination and love – our defences on those occasions when nature shows us what she can do.

The trailer below is spoilery so be warned.

About Kate (For Winter Nights)

Lover of books
View all posts by Kate (For Winter Nights) →
This entry was posted in Film, Reviews and tagged ewan McGregor, Naomi Watts, The Impossible, Tom Holland. Bookmark the permalink.
%d bloggers like this: