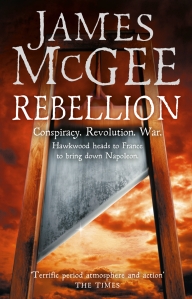 The year is 1812, Napoleon is in Russia, along with almost every able bodied man in France, and England and France are tired of war. The time is ripe for revolution (again). Bow Street Runner and former soldier Matthew Hawkwood is seconded to the Alien Office and it has a mission for him, so secret that they won’t even tell him what it is. Travelling blind, Hawksmoor sets sell for France on the Griffin, on seas so tempestuous that a crew member cries out ‘By Christ, I hope you’re worth the bloody trouble!’.

James McGee’s Rebellion may be the fourth in a series of Hawkwood adventures but it is a stand alone novel, as I can attest, not having yet read the preceding three. While reminiscent of Bernard Cornwell’s Sharpe , this similarity may be surface deep because in Rebellion the action is very much more more to do with politics and subterfuge than with flashing blades and battlefields.

Arriving in Paris, Hawkwood is set the mission of working himself into the confidence of ambitious – and imprisoned – French General Malet. Malet’s plan is to overthrow the Napoleonic regime by announcing to all and sundry that the dictator is dead, fallen in Moscow. The new government will seize the moment, swapping the prisoners of the Temple tower dungeon for the feared persecutors of Napoleon’s government. From the moment that Hawkwood gives their plans a much needed kick forward, the tension doesn’t let up, not for an instant.

Intrigue rather than action dominates Rebellion. No name can be relied upon and no friendships can be trusted. Along the way we meet sincere and brave proponents for the many sides, not least of whom is the self-sacrificing wife of Malet, who just needs an embrace from Hawkwood to carry on. Another character that springs to mind is Stuart, the commander of the Griffin. This man left his ship in dire straits and in great personal peril to rescue a spy with no name – a Mr Smith – and fulfil his mission. The courage of Stuart and his crew stays with Hawkwood throughout the novel. It’s not to be underrated.

The storm through which the Griffin founders bit by bit will have the reader holding onto the arms of their chair for calm and, although the majority of the novel is tense with danger rather than action, it is no less riveting for that. This is partly because above it all looms the iconic image of revolution, the guillotine. And its menace never lets up throughout the novel.

While the story is compelling and the writing is excellent, this is not a gentle world. The fate of brave souls matter little. There is always another adventure ahead for Hawkwood, there is little time to think on the fate of those he leaves behind. But read Rebellion and there is a high chance you will be hooked. I haven’t read the preceding three adventures and that didn’t matter a jot. I may well do now though.

1 Response to Rebellion by James McGee