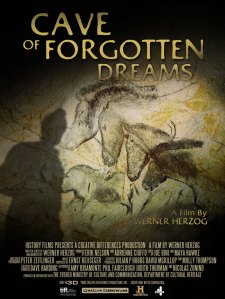 Cave of Forgotten Dreams is a documentary about the remarkable Palaeolithic paintings that cover the walls of the Chauvet Cave in Southern France. Discovered as recently as 1994, these paintings have been identified as the oldest ever found, with some images dating from beyond 30,000 BC. Locked behind a bankvault door and concealed from the eyes of all but the smallest number of dedicated scientists, the paintings are now brought to the public’s attention and the big screen thanks to the unprecedented access granted to Werner Herzog, the director and writer of Cave of Forgotten Dreams.

I should point out that this is a review of the 2D version of Cave of Forgotten Dreams. I didn’t have the option of seeing it in 3D. Which is a shame, because the publicity for the film makes a lot of noise about the significance of Werner Herzog’s use of 3D photography. However, that being said, and not having the 3D to compare it with, the 2D version appears to lose nothing within the confines of the dark cave, where images leap out from the scratched rock walls with every movement of the crew’s light panels.

Everything about this film is reverent and that isn’t surprising. The cave’s original entrance had been sealed in a rockfall 20,000 years ago and, as soon as the caverns were reopened, the environment and the paintings were endangered by that most benign of threats, human breath. The world-famous and, at the time, unique Lascaux Caves in France were sealed from view after mould was found growing on the paintings caused by moisture from the breath of visitors. I was one of those visitors and I’ll never forget it, especially now that it is near-impossible to see these paintings firsthand except through a reconstruction.

Herzog and his team are confined to a narrow metal grid of a walkway. Their time is limited. And even when confronted with the earliest known representation of the human figure, painted onto a pillar, they are not able to leave the walkway to view the other side of the image. Everything is tantalising and just out of reach. Even when the images (horse, lion, rhinoceros, bison, hyena, deer and much more) are fully revealed their significance is a mystery.

One image may overlie another and there could be five thousand years between the creation of these overlaying images. They make use of the contours of the rockface and, by inference, the movement of handheld torches. They depict movement and mood. They also, and this is what is so extraordinary to me, are only found in the dark parts of the cave. Originally, the cave was open and the first and biggest cavern was exposed to light. There are no paintings there. The first images were painted where the cave grew dark. There is also no evidence that anyone lived in this cavern, just cave bears and wolves.

And so Herzog approaches these paintings as if they are a message from the past, the first communication for the future from our early ancestors. The thinking behind the creation of these images is not knowable but Herzog approaches the subject through light, music, philosophy and reflection. He is aided by the opinions of some interesting characters in their own right, archaeologists (one used to be in the circus and another who throws recreated spears in a less than convincing but exuberant manner), scientists, geologists. Through these experts we learn about the context of the culture that painted the animals and left palm prints (one man’s prints leave a trail through the cave, recognisable due to a bent little finger) with similar cultural motifs reaching across this part of Ice Age Europe. It’s also hard to ignore the significance of the great rock arch a short distance from the Chauvet Cave.

Much of the time there is no dialogue at all. While one would think that this approach might be dull, it isn’t here because the highlight of the film isn’t the commentary, or the music, or the archaeological comment, or the science, it’s the paintings themselves and this film presents a rare occasion to spend some time in awe of them.

My only complaint about Cave of Forgotten Dreams is that tone of reverence. It rarely eases and it does feel in places like a monotone in need of a lift. Or a greyscape in need of some colour. It contradicts the movement and energy of the painted animals, several of which have open mouths, snarling teeth, multiple legs, almost as if they are the earliest expression of moving pictures. It is also a shame that subtitles weren’t used for the non-English speaking experts. These are minor complaints and matter little when weighed against the chance to encounter the earliest known paintings of humankind. And just look at them, they’re beautiful.