The Eagle – a review 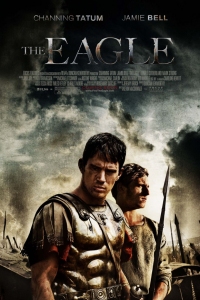 I find films about Rome and Romans very difficult to resist. Just as well, then, that I am able to suspend disbelief in good two-hour chunks. This was particularly vital for my viewing of The Eagle this weekend.

Based on the 1954 children’s novel The Eagle of the Ninth by Rosemary Sutcliff, The Eagle follows the efforts of Roman Centurion Marcus Aquila (Channing Tatum) to win back honour to his family, an honour that was lost when his father led 5,000 men of the Ninth Legion to their deaths, north of Hadrian’s Wall. More importantly, along with his life, he also lost the very symbol of Rome, the eagle, the standard of the legion. When rumours are heard that the eagle is in the hands of the terrifying Seal People of the north, Marcus sets out with his slave, Esca of the Brigantes tribe (Jamie Bell), to retrieve it.

This is not entirely unfamiliar. The 2010 movie Centurion also follows the struggle of Roman stragglers from this infamous Ninth legion to stay alive in the hostile north. They didn’t fare much better in that movie. In Centurion, the danger from within came from the mysterious and beautiful Etain. In The Eagle, the element of uncertainty comes from Esca. Just how loyal is he?

You don’t need to be a TV documentary expert to know that The Eagle is not exactly an authoritative fountain of knowledge on Roman and ancient Britain. It is also very polarised in its opinions – despite the light inclusion of some fatcat corrupt Roman politicians – this is a Roman Britain where it’s great to be a Roman and not good at all to be a Seal Person. Even the talk about the inhuman treatment of British men, women and children at the hands of Roman legionaries is nullified when it becomes clear that the Britons are even worse. If only history were that straightforward that Hadrian’s Wall really did mark the end of the known (or worth knowing) world. Roman influence extended far north of the Wall just as much of the day-to-day business of Roman Britain was conducted by Romanised Britons.

The problem with The Eagle begins when Hadrian’s Wall is crossed and everything gets a bit shadowy, a little mysterious, a lot more sketchy and very drawn out as the two men search for trouble. Before that, there is a very exciting opener to the film, as Marcus arrives to take control of a slightly neglected fort in England and soon gets the chance to prove his worth. This part of The Eagle also benefits from Denis O’Hare’s performance as the older deputy Lutorius. The role is a relatively small one but he completely out acts Channing Tatum, who has an acting style that demands that most of his movies should have two words in their title, the first one being ‘The’. Tatum is good in the fighting scenes and he’s great at looking wronged and vengeful but little more is required.

Jamie Bell is the Briton and so he is. He doesn’t need to do much more than that. Chemistry between Bell and Tatum would have helped. Likewise, it’s not a particularly demanding role for Donald Sutherland and he doesn’t give it much effort. By contrast, Mark Strong does so much with his brief appearance as Guern that he left me wanting more. There really isn’t too much that can be said about the blue-painted people of the north. They have no saving graces. The Eagle, however, does.

Filmed on location in Hungary and Scotland, the film looks wonderful, with visual treats that remind the viewer of previous work by director Kevin Macdonald, such as Touching the Void and The Last King of Scotland. The battles and fight scenes are realistic and edge-of-the-seat stuff and you will long for Marcus to succeed in his life-defining desire to right a wrong. But, above all, Scotland looks incredible.