I made the acquaintance of Harry Potter’s successor today: Percy Jackson. The similarities between the two – one a franchise nearing its end and the other a franchise in the making – are pretty obvious. But now we’re on a different scale. We’ve moved away from the dark hidden London alleys, middle class suburbia and Scottish castles and lochs. Now we’re in Olympian territory, complete with a very unpleasant visit to the Underworld, ruled over, a little bizarrely, by Steve Coogan and his grumpy wife. However, there’s not much that’s Greek about this Olympian universe – Mount Olympus is at the end of a golden lift ride in the Empire State Building, the Parthenon is in Tennessee and the entrance to Hades is under the Hollywood sign.

There is a lot in Percy Jackson and The Lightning Thief to enjoy, especially watching Logan Lerman take on the lead role. But, for me, it felt like too much was packed in, just to prove that the storywriters had read up on their classics (or at least seen Clash of the Titans). We had a harpy, a cow-throwing minotaur (surprisingly easy to dispose of), a hydra, a leather-clad Medusa, lotus-feeding temptresses, not too mention centaurs, satyrs, heroes and the quarrelsome (and rather pretty) gods themselves.

It’s difficult to complain about a 40-foot Sean Bean as Zeus or the charismatic, the always excellent Kevin McKidd as Poseidon, cenotaur Piece Brosnan, except to say that there was not enough of them. And that was completely opposite to how I felt about the baddie of the piece, Luke, the son of Hermes, who, Heavens knows how, stole the Lighting Bolt from under Zeus’ enormous nose. And then Luke hid this flashy tool inside the shield he gave to Percy, which Percy used frequently throughout the story. The final battle was unexciting and uninteresting. It could have been easily sacrificed for more time on the peak of Mount Olympus.

My biggest complaint, though, was the misuse of the excellent actress Catherine Keener who, very definitely, was absent in spirit throught this film. They might as well have had a cardboard cutout – or borrowed one of those dummies from Surrogates. Steve Coogan may also have needed a nudge. Uma Thurman, by contrast, seemed to enjoy her meaty role.

I’m wondering how the hydra, turned to stone, was explained away. 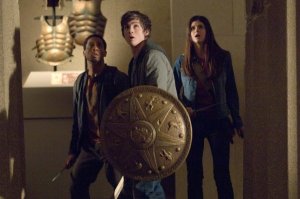 I left an extremely packed cinema thinking that I would definitely want to see a sequel and that I would probably enjoy it more. The leads are likeable, just as they are in Harry Potter. I am also looking forward to seeing the remade Clash of the Titans this Spring – if only to see Medusa in 3D. It will be interesting to compare the two.

3 Responses to Percy Jackson and the Lightning Thief – Olympus Reimagined