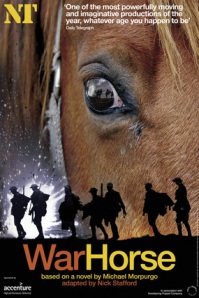 Ever since Close Encounters of the Third Kind and Jaws, two of the first films I ever saw in the cinema, I have been happy to grow up to, or stay a child with, Stephen Spielberg’s films. Spielberg has explored both the fluffy and the horrific and with both I have felt that I was in safe hands. For possibly the first time, War Horse gave me a moment’s worry. I have never enjoyed non-animation films based on animal stories (Tarka The Otter Syndrome I call it) because they give me the suspicion that I am being manipulated to feel a sentiment that the animal is unlikely to share. Nevertheless, this is Spielberg and so I pushed my qualms to one side and headed into the cinema with a roll of kitchen towel.

My plan was to do a tear count but I’m afraid to say that this was completely unnecessary. Not a tear fell from my eyes. As someone who cries at more films than films I don’t cry at, this was a surprise, especially considering the state of some of the people around me, but there it is. I was worried I would be immune to War Horse and I was. The problem was apparent from the very first minute of the film. Idyllic Devon countryside, blurry edges, pretty cottages with a bit of muck, nasty landlords, put upon drinking yokels, supportive wife, ageing before her time, and a boy with dreams feeding apples to a foal in a field. It felt like I was back in Shire and if a hobbit or two had walked across the screen I wouldn’t have been surprised.

War Horse is the story of Joey, a young thoroughbred horse with the heart of a lion. Unsuited to life as a farm workhorse, Joey works with Albert (Jeremy Irvine) to save the farm from seizure but when the harvest fails at the moment when the Great War breaks out, Albert’s father (Peter Mullan) has no option but to sell the horse into the cavalry as the mount of Captain Nichols (Tom Hidddleston). From then on, we follow Joey through his war years, as he moves from owner to owner, English, German and French, and through each act we see the increasing horror of this war. And it really is horrific, just as Spielberg can do so starkly and brilliantly (Saving Private Ryan, Schindler’s List).

The presentation of the war, notably the scenes on the Somme, are hard to get out of the mind. The small child in front of me in the cinema was distressed and her mother tried to shield her eyes. What looked like an episode of Black Beauty at the beginning had turned into the stuff of nightmares and I wondered if the two went together. But I found the message too laboured – English and German soldiers working together in No Man’s Land to save a horse. I also found the characters all too two dimensional. Their purpose was to show how wonderful the horse was and for this end my interest in their stories was sacrificed.

Nevertheless, despite the fact that I am clearly and sadly immune to films about horses, there was a lot here that I enjoyed and for a film that was well over two hours long the time passed very quickly. If I hadn’t have had a roll of kitchen towel in my bag and hadn’t have been so conscious that it was unneeded, I would have put more heart into it. War Horse is beautifully put together and there are moments of staggering heroism only matched by the sheer stupidity of what these men faced. Horses and swords against tanks, machine guns and gas. War has changed since the one fought by Albert’s father. Bravery, courage, pride, honour, these are all themes as people run headlong into the bullets.

I was affected by War Horse more in retrospect an I think it could be one of those growers as time passes. I think if it had lost a good half hour and had cut some of the sepia-tinged linear tale of the the early years of the horse, right from the moment of its birth, I would have been more susceptible to its sentiment and less inclined to separate the war story from the horse story. Those scenes on the Somme are going to stay with me for quite a while, although not for the horse caught in the middle but for the men in the rat-filled trenches.